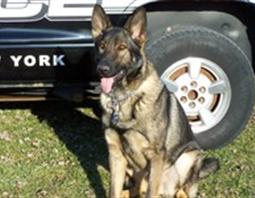 The Newark Police Department's K-9 Unit is comprised of one handler and a highly trained German Shepherd partner.  Office Dan Weegar is assigned to K-9 Fedor, a 2 year old sable German Shepherd.  The K-9 team completed a 4 month patrol, tracking and narcotics course at the New York State Police K-9 Academy, Cooperstown, NY in the spring of 2009.  The K-9 Team is New York State certified in both tracking and narcotics detection.

The K-9 team is currently assigned to the 8 p.m. - 4 a.m. shift.  This allows for maximum availability during peak times.  When the K-9 team is not on regular patrol duty, it is available and can respond from home to scenes within minutes.  In addition to their regular patrol duties, the handler and their partner continuously train on a monthly basis in order to maintain the Fodor's efficiency and discipline.

The Newark Police Department's K-9 team provides backup support and other assistance to the Uniformed Patrol Division which responds to calls for service and crimes in progress.  When called upon to do so, the K-9 team will search buildings, houses, streets, or wooded areas for suspects, missing persons or aid in efforts to search and detect illegal narcotics.  The K-9 team will also lend its specialized search skills and backup support to the department's other units during high risk search and arrest details.  The use of the K-9 team often will increase officer safety and also increase the probability that a suspect will be apprehended.  The K-9 team is also dispatched to calls for service as the primary patrol unit when not actively involved on a detail.

The Newark Police Department's K-9 team also conducts numerous presentations throughout the year at various community events and schools.  They will display the team's skills and abilities and give lectures about the various duties and responsibilities of the teams.

If your organization is interested in a demonstration, contact Chief David L. Christler at (315)-331-3701, or by e-mail dchristler@newarkpd.net

Other Police Divisions include: